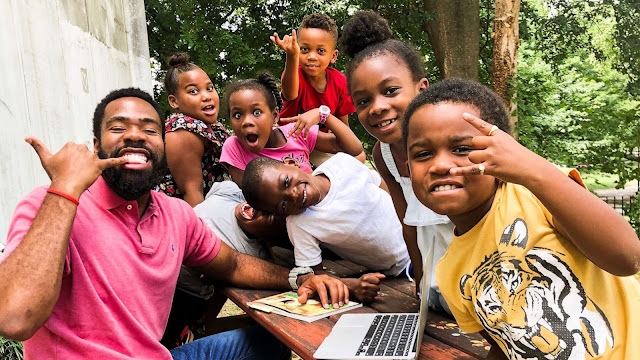 A Conversation with Sammy Rigaud: AWKWORD Interviews the Most Poppin Teacher in Atlanta

It wasn't that long ago that I hadn't heard of Sammy Rigaud. I don't reside in or keep close tabs on Atlanta, where Sammy lives and works, and — while the late, great Praverb was a Christian Hip Hop artist, and we strive to support faith-based music on Praverb.net — I don't listen to religious rap. So, what happened?

Since the mid-1990s, I've been using Hip Hop (and, specifically, my Protest Music) to educate and empower the youth — first as a young person myself; then as a college student and young adult, guest speaking in classrooms and working at after-school programs and alternative-to-incarceration centers; and more recently on college campuses and at demonstrations and protests. Hip Hop saved my life. It gave me a culture with which to identify, a music that beat to my pulse, and an outlet for my anger and sadness.

Thanks to my friend Dr. Christopher Emdin and a growing cadre of smart, community-connected, openminded educators, HipHopEd is saving lives all over the country, every day. 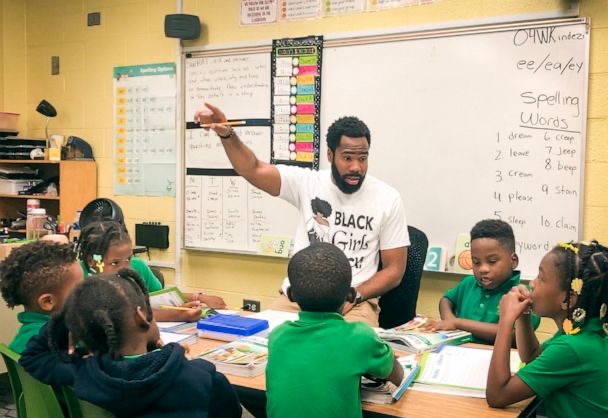 The Christian rapper, community organizer and public school teacher Sammy Rigaud is one of those (Hip Hop) educators — and he and his young students went viral in November 2019.

Why? Simple: Sammy told his students — raised when and where rap and Hip Hop permeate everything — that if you score 80% or higher on the weekly assessment, "you get a turn" freestyling, on video.


Since this inspirational teaching decision first made waves on social media, Sammy and his kids have been featured on Good Morning America, Coed.com, The Shaderoom, Complex and the very tastemaking radio show they listen to everyday in Atlanta.

And, of course, when this type of feel-good story gets its due notice, it influences other teachers and schools to adopt similar tactics.

As soon as I saw the video of his students freestyling better than most mainstream rappers, I did my googles on Sammy and then asked him for an interview.

This here's a man who deserves the shine, even though he'd probably prefer it all went to his class and community...

1. Peace, Sammy. So excited your students and you have received the attention you have. For how long have you been teaching?

I have been teaching for six years.

2. Long time coming! Where and to whom have you taught, and how did you end up where you did?

I have taught in South Florida and now in Atlanta. I got in to teaching after a judge ordered me to do community service. The community service was at a YMCA where I had to supervise kids while their parents waited in line to receive resources. After spending two hours with 40 kids, all super impressionable, I knew that I had found my purpose. 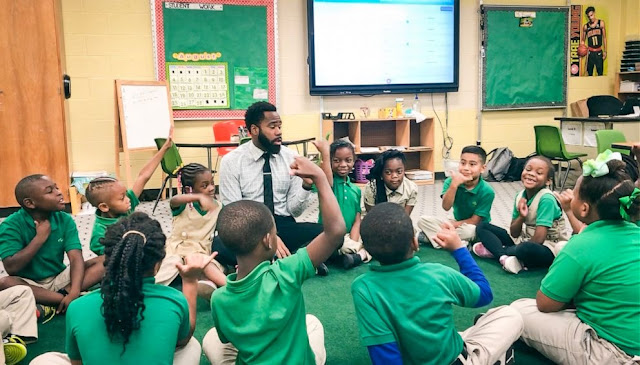 3. Glad that judge chose wisely. What was your childhood like, and did your upbringing and experiences as a youth also influence you to become a teacher?

4. I can certainly relate to that. I was also misunderstood, labeled and targeted, and that's how I found Hip Hop, activism and, specifically, working with the youth. What is the importance of connecting with young people — and your students — and using their language and experiences in reaching them?

Connection is everything. When students are engaged, they achieve more. It helps that I look like them, speak like them, and belong to the same culture that they do.

5. Definitely. Do you consider yourself a Hip Hop Educator?

Most definitely. I teach the four elements of hip hop: dance, graffiti, rap, and DJing. 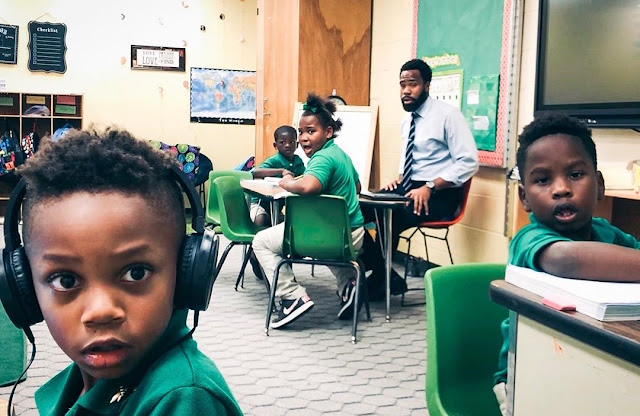 6. And what are your knowledge of and feelings about the HipHopEd movement?

7. I certainly agree. From personal experience, I've seen how it works. The kids at the after-school program and teen center in Poughkeepsie were engaged right away, as soon as I started asking about their favorite rappers. I was helping a teenager at an alternative-to-incarceration center study English for his GED, and it wasn't until I turned it into a rap writing exercise that he finally started to pay attention. And I've seen the impact my music has on college students when it's introduced in the context of a larger lesson in sociology. It's amazing... For someone looking in from the outside, how would you explain the ways Hip Hop, education and social justice intersect?

Hip Hop at its birth has always been a mouthpiece for those that felt left out. It was a poetic form of expression for minorities. Early rap was tied to social injustice movements. Songs like “Fight the Power” pushed the conversation of inequality. For many people, this Hip Hop movement was their first exposure to these injustices, which asks the question, 'Where would society be without hip hop?'

8. Yes! How did you come up with the idea of Freestyle Fridays, and what was the students' and parents' initial response?

In our grade level, we have a weekly reading assessment. This is a big part of their grade. Many of my students were struggling terribly, so I decided to come up with an incentive that would encourage them to study during the week. Every time I would release them to have free time, I would sit back and observe them. Many of the boys would go on YouTube and look up instrumentals and come up with lyrics. I said, 'gotcha,' because now I knew what they wanted. I decided to come up with the program that if you score 80% or higher — 75% is the baseline passing score — you get to participate in Freestyle Friday.


9. And it seems like it worked! How has it affected the students' grades, self awareness and self confidence, connections with each other and comfortability with you?

Students' grades have gone up tremendously, because they have been motivated to participate in Freestyle Friday.

They feel better about themselves, because they're learning that, one, they can achieve and, two, expressing themselves through Hip Hop is not taboo, it's actually embraced.

They connect with each other because they're cheering each other on to achieve, and they connect to me because we share the same interest. 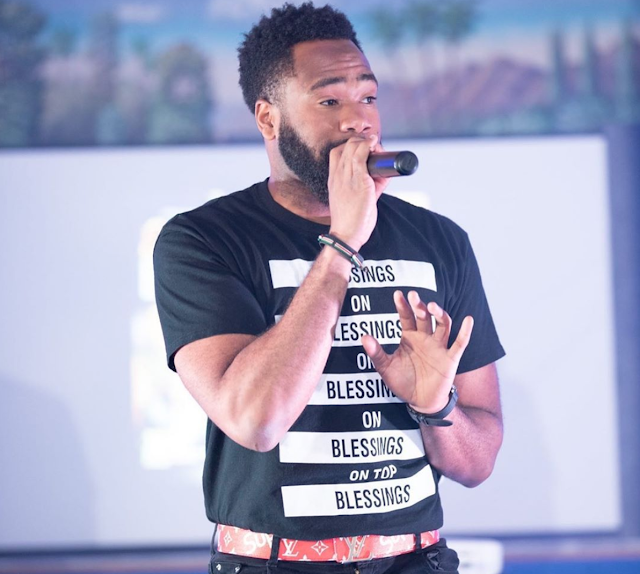 10. How did the higher-ups in your school respond to your approach? Has their stance changed in response to success rates or national fame?

Initially, they were hesitant, but once they saw the results, they were in full support — and the fame has brought a positive light to the school, which is well needed in the community.

11. That's great to hear. What about your kids!? How have they responded to your and their newfound notoriety?

I preach that all we have is this moment. The students have bought in to this and have really stepped up to the challenge. We've been doing interviews and still going through our full day of learning, and that starts with me. I've made sure that we still focus on what's important.

Going viral is fleeting, but these foundational skills are the footsteps to success. 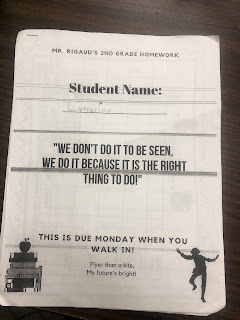 12. That is definitely a testament to you, and them. How do you think your race plays a role in how your students and their parents perceive you?

I've experienced both sides of the coin. When I worked at schools of the majority, parents would be hesitant to embrace me as their child's teacher. When I decided to work in urban communities, I was embraced because of the shared culture. In both instances, I still remain motivated and my approach is unbiased. 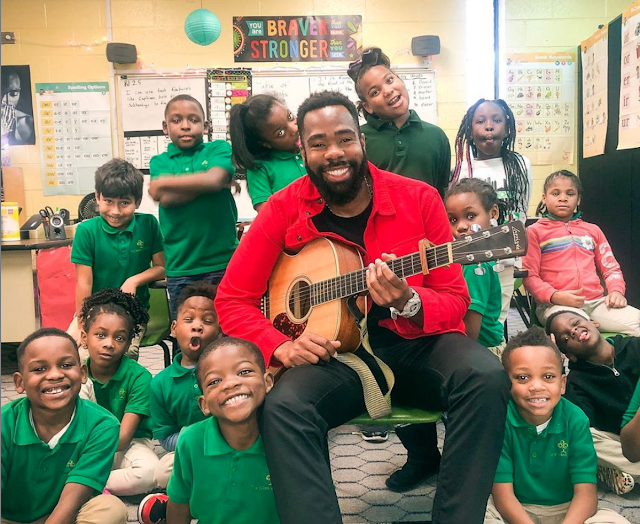 13. Respect, that's not always easy to do. So how would you describe the current state of America's educational system, as it relates to race and class?

Race and — more specifically — class drive education in this country. Funding is distributed unevenly, and schools that are in poorer districts don't have the same opportunity to achieve. Being that schools are underfunded, the onus is placed on the instructors to find creative ways to teach the same content with fewer resources. This is a battle that most educators refuse to have, so this leaves urban schools not only underfunded but undermanned. The best leaders, the best instructors and the best strategists flee to wherever the resources are.

14. It's the sad truth, and well articulated. That's where after-school programs and other youth programming comes into play... So, tell us about your experience as a youth advocate. What does that mean and how is it manifested?

As a youth advocate, my goal is to empower all who I come in contact with. My mission is to allow children to see themselves in the most positive light possible. I target youth who have been disenfranchised and outcast. I try to uplift and inspire them to look past their environment. 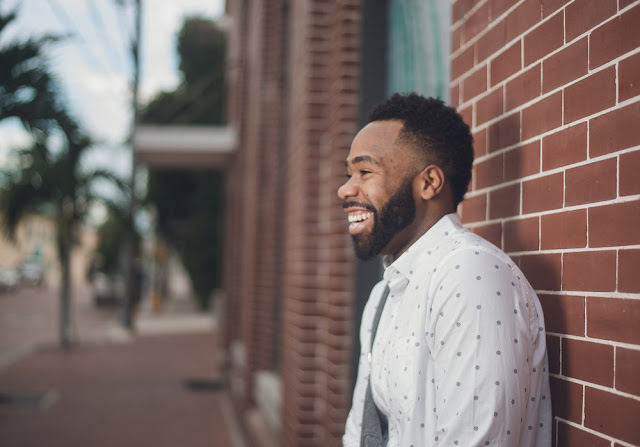 15. And what about your music? What is the name of your rap name and rap group?

I'm in a group called K4C Music. My rap name is Sasa.

16. What kind of music do you make, how long have you been doing it, and how does this play a role in how you approach your teaching/youth advocacy?

I make uplifting music with a Christian theme, I've been doing it for about seven years, and it aligns with my overall purpose to uplift and inspire.

17. OK, and how does it affect how you educate and advocate for youth?

My religion promotes wholeness, so my goal is to teach the whole child... Yes, that's curriculum, but it's also social and emotional.

18. Super important. A depressed, distracted child certainly can't maximize her learning opportunities. So, with all this going on, how do you manage to juggle your time?

Honestly, I still struggle with that. I do my best to allow each role to have its season. I do a lot of my music and youth advocacy in the summer — with camps, mission trips and tours... The good thing about being a teacher is you have no obligations while the students are on vacation. 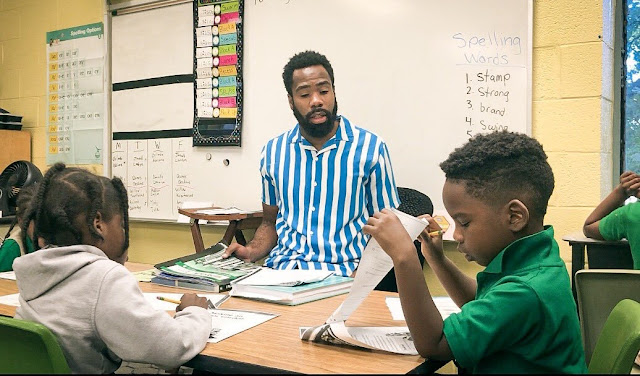 19. True, but the work never really ends. In what ways do you plan to leverage your success and fame to benefit your students, the community and yourself, moving forward?

I believe I've done a good job of pouring in to my students and community before the fame. I was a servant first. Now that I'm on a bigger platform, the objective is to continue to empower this community with the outside resources that the fame has brought.

20. True selflessness is hard to come by in our fame-obsessed society. What plans do you have for your students once they leave your classroom? How do you continue to influence and direct them?

Students leave my classroom, but they do not leave my life.

I don't necessarily have a system in place, but I keep in touch with more than half of the students that I've had. Families of these students know that they can always come to me. 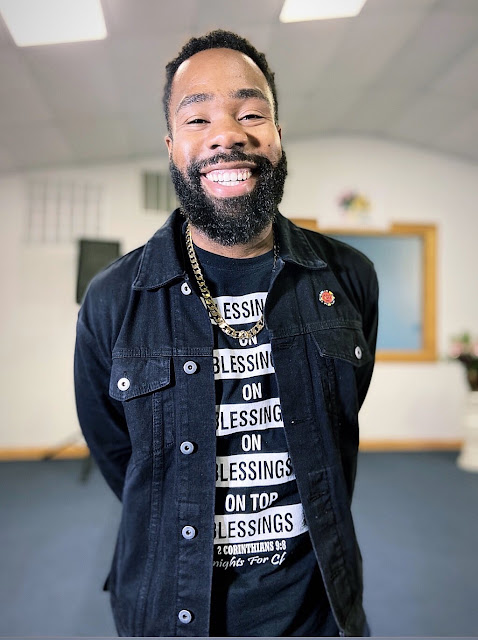