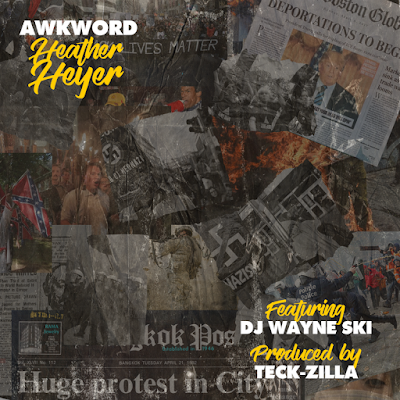 This is BIG for me. My first new song in 9 months!


"If you're not outraged, you're not paying attention." – Heather Heyer

Since adopting two young kids a couple years ago and taking on full-time daddy duties, I've been on an unexpected creative hiatus — and I mention that in verse 2 of my new song...

"Heather Heyer" is a personal song, as I find myself struggling amidst the madness that has overtaken this country. But "Heather Heyer" is also a political song: it's a BIG Fuck You to Donald Trump and, more importantly, a tribute to Heather, who was run over and killed in Charlottesville.

This song is a rallying cry. You don't have to be a masked member of ANTIFA or Anonymous to know that all of us who want social justice and racial equality here are up against a dangerous and strengthening enemy. (Nazi Punks Fuck Off!)

As Heather's mom, Susan Bro, said at her daughter's memorial (and as you'll hear in the intro to my song):


"They tried to kill my child to shut her up. Well guess what? You just magnified her."

Help me help Susan (and Heather) by taking a listen and spreading the word (by sharing on social, posting on your blog, playing on your radio show, playing for your friends, etc).

100% of the proceeds from this song will be donated to The Heather Heyer Foundation, founded by Susan to help fund future social justice activists.

"New York emcee AWKWORD has decided to return to the fold after 9 months with a powerful new song titled “Heather Heyer (F*** Trump),” named after the 32-year-old woman who was tragically killed while protesting against a white supremacist rally in Charlottesville, VA. It’s clear that he’s just as sharp as ever lyrically, holding no cut cards in regards to his feelings on the matter (and the powers that be, period)" – RESPECT Mag