The Legacy Of Praverb The Wyse 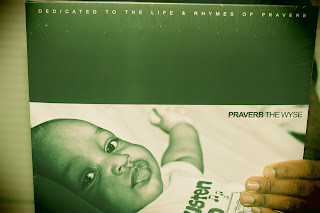 (Author note: P's music saved my life, his legacy and his presence continues to thrive across the world globally! I will be blogging a lot more this year, in the mean time I'll be listening to this! Grab and Support and most of all listen to the Art of Hip-Hop!)
Praverb the Wyse: The Legacy

After we heard about Patrick's passing. Damian (Soulmade) decided to blow the dust off his virtual crates to reanimate some old vocal-recordings and compile a record that'll keep Praverb's musical legacy alive. He contacted some of Patricks companions and MCs he looked up to. Everyone of them joined the project to honour Praverb's life and work. All tracks on this record were remixed and rearranged by Soulmade. After receiving the additional vocals of all featured artist, the final versions were put together and completed with some cut & scratches!

All of this is done with coutesty of Patrick's wife Vanessa! Thank you so much for believing in this project! Also a big thanks to hhv.de for releasing the vinyl-pressing!