Behind the Beats Interview: ICBM

This Behind the Beats interview highlights the production talents of French based beatmaker ICBM. The questions and answers for the interview is presented below.


First and foremost, who is ICBM?

Hi! So...I'm a producer, beatmaker, musician. I go by the name of ICBM. My real name is Benoit.

Where do you reside?

Bordeaux, France. I moved there almost two years ago. I grew up in another part of France, Normandie, but I moved to Bordeaux for musical reasons...to work with a friend of mine, Leroy Chambers. We just finished building our new studio, Shaman Productions, last October. 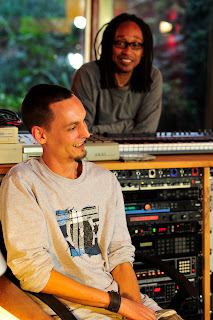 I don't know exactly...it might be something like 10 years. I remember I started making beats on a software, well a game to be more precise, that was named Music 2000 on Sony Playstation. That was a lot of fun, and my first approach of sampling. I really liked it and then I bought a computer and never stopped making beats.

Who inspired you to make your first beat?

A friend of mine, an emcee by the name of Cherno-Bil. At this period, high school, I was mostly listening to metal. I knew almost nothing about hip-hop, but he made me listen to some really good french hip-hop. I really felt the lyrics cause it was speaking to me, I was able to relate to what the emcees were talking about. I really can tell my awakening to hip-hop came through the lyrics first.

Your production has been featured on projects from ILLUS, Perry Porter, King Lee, and more. Describe the difficulty associated with working with international artists.

There was no real difficulty, cause I'm lucky working with people who are really open minded and easy to work with. Illus, Perry, and King Lee, I still haven't met them, we worked only by internet. I really think the Internet is a wonderful tool.

Working with people in "real life" is still better because the music is a relationship and human thing... but when u live in the middle of nowhere, like I used to, then you have no other choice than using the Internet to connect with emcees.

Working with Perry Porter, on his album Paper Moon was a real challenge! I produced it entirely. It is a concept album. Perry knew exactly what he wanted, everything was planned. So we work on music, I send him some demos, he records his vocals, then we re-work on music, rework on vocals, work on arrangements, effects, mix...all this process, by emails. That was really interesting working that way. Time and communication were our two best friends on this.

Is there a language barrier that you deal with?

My English is not perfect but I don't think it has ever been a real problem. I sometimes stumble with the exact meaning of the lyrics. Emcees play with words, metaphors and stuff, so it makes it difficult, but music is an universal language, so it works!

You worked on an collaborative album with Trainspotters which gave you the opportunity to tour France. Would you mind talking about the touring experience?

Wow...so much too say! That was dope!

The funny thing is that I had never met them before. They arrived in France on a Monday night, our first show was on the Wednesday. But everything went good, cause they are professionals.

We had a lot of fun, played some small shows, some biggest ones (like opening for Method Man), all the shows were great! It's definitely not a size thing!

I can't wait to see them again! We spent a complete month all together, and I just hope to redo this again.


Who would you like to work with in the future?

I hope to work with more french artists too, France good some really good Emcees.

Oh, and any artist I can relate too. As simply as that!

I'm really open musically and then I'm probably gonna try some more experiences in the future.

Thanks for reading this interview!

Thanks to Praverb for doing it! (I hope to work with you again, I really like the track "That's How It Is" that we worked on together)

Thanks to everybody who supports me! Thanks to Life !