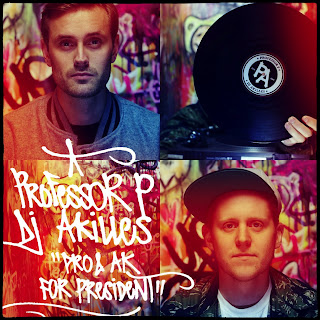 Earlier this year Professor P & Dj Akilles released the ultra dope project called The Realism. I actually reviewed the album. The Swedish based hip-hop duo are back with a new single from an untitled EP.

"Pro & Ak For President" is a classic hiphop banger with a chopped sample, verses that display Professor P's skills as an emcee, and a fantastic scratch-chorus by Dj Akilles. Not very complicated, but very dope.

The video is pretty creative. I love the unity that is exhibited in this video. The props were very minimal (a photo booth) and a collection of Swedish talent ranging from other emcees to dj's to musicians to streetwear entrepreneurs.

The director, Jacqueline Ragheb, describes the video like this:

During this shoot our colorful and artistic photo booth captured happiness on faces that can not be wiped away. Pro & Ak is brings hip-hop back to the roots and throughout this video we wanted to show love for the music, love for art and above all, love for life. This song gives us alot of energy and joy and our photo booth represents that. So come get some!

[Professor P]
Eyo they heard of me from Germany to Spain, the fame ain't concerning me I aim
to be verbally insane/
On a murder spree, showing em' the third degree of pain/
Reign eternally, we came to take it further in the game/
I was born on the same date as Keith Elam/
it's only right that we give ya rap and scratch with a street feeling
keep spilling my soul, no cheap thrill and my feet's still on the road
although its cold I just keep dealing/
with bass lines, kicks, hi hats and snares/
with sample as ammo we gon hijack ya ears
cheers to all my peers who've had my back for years/
and my crew is fly with our do or die rap careers/
so as the worlds turning, the sun be still
I'm rhyming for a couple Heinekens and one free meal/
I look like a cast member outta One Tree Hill
Still I'm Too Short pimped out and Bun B trill, chill...

[Professor P]
Eyo we bring the soul back like Show on the Soulclap beat
you know the vibe, Large Pro and Tribe, that old Black Sheep
Bout to snap like a Kodak on those that sleep
It's a known fact we rep, check the whole rap sheet
run tracks like a pro athlete, except with no track meat
just a flow that'll blow - gas leaks
from the hot boulevards to the cold backstreets
we'll keep it true til we're at least a few gold placks deep
Deep as the wordplay's get
i need a first aid kit, cause every verse stay sick
in the worst way, slick from the first bass kick
spots get blown on some candles on ya birthday shit
this ain't boombap it's soulbap from new rap to old rap we represent
you know that it's pro ak for president
still glistening, for the fam who still listens
have patience and maintain, that's the realism...
Email ThisBlogThis!Share to TwitterShare to FacebookShare to Pinterest
Labels: Dj Akilles, Lyrics, Professor P, Singles, Video
Newer Post Older Post Home