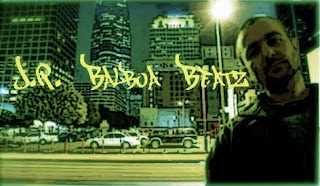 Hey JP. Can you give us a brief description of who you are and what you do?

Hey y'all! I'm JP Balboa from Rome, Italy. I’m basically a sound nerd. I’ve been making beats since 1991. I work as a Sound Designer, Mix Engineer and Foley artist for companies such as Universal, Turner and Fox as well as independent production companies...I'm getting older!

That's some seriously big names! Have you any features the masses should listen out for or better still may have heard already?

Most of my work is for the Italian branches. Perhaps people may have heard my commissions for "Touch" or "The Walking Dead" on behalf of Fox USA. I also worked on a Serbian Zombie movie called "Apocalypse of the Dead" or "Zone of the Dead" (they changed the name in some countries) starring Ken Foree and Kristina Klebe. I also worked on some Italian Fictions and on a lot of documentaries for The National Geographic and History Channel.

As for beats, I worked on many projects from 1990-2000 when I co-ran an indie label. However the partnership didn’t work out and my beat production began to slow down.

It's clear you have a wide scope for your production. You touch on the fact you had co-founded an independent label - did you have many releases?

I released 5 Albums and a vast array of singles. 4 of the albums contain a lot of my productions – only one is mixed and mastered by myself. Everything I released was between the mid-90s and 2002. Unfortunately my business-partner vanished with the profits and left me with all the debts he had made in the name of our Label. I had to sell all of my equipment in order to stay afloat. I'm now working on beats with an old white MacBook and a set of cheap headphones - but I’m still here!

Indeed! This seems to be the case with many independent labels. It's a real shame and goes to show that even in hip hop it can very often be all about the money. Your depleted setup doesn't appear to have stopped you getting the respect and love from the fans though. Are there any new projects on the horizon we can look forward to?

Yeah, it's a shame but unfortunately that's how it goes. I think "fans" is such a big word (hehehe) but I’ve been amazed by the feedback I’ve received – particularly through SoundCloud. That feedback is my energy. I make music for music lovers so it’s a real treat for me on there.

Right now I’m finishing a beat tape inspired by the Delfonics. It’s a project with only Italians beatmakers. It should be available in mid to late May.

Here's a teaser of the project:

I'm also working on an album with two Spanish hip hop artists, Wane DJ and Big Pancho. We’re in the pre-production phase as speak. Lastly, but perhaps the most important is my collaboration with a great (in my opinion) MC from Glasgow called Hosie. We are both driven by the same passion for hip hop music – we believe hip hop is a universal language and the music belongs to people and the streets - I know I’m a little too purist :)

You say The Delfonics were your inspiration for your Beat Tape project and touch on the fact you are a bit of a purist but what or who inspired you to first start making beats?

That's a long story...hehehe The main culprits of my early love for the black culture were my father's passion, or better addiction, for Jazz, Blues and Gospel and my brother's couple of Technics 1200. He was a DJ and played 80's disco music...But one day, I think it was 1988, he put a record that left me speechless...I felt in love from the vinyl crackle. It was Eric B. & Rakim's Paid in Full album! I consumed that record! At that time there was no internet, no YouTube....

There was only the radio and the record store. Hip hop in Italy was almost unknown and it wasn't easy to find all records you could have heard about. And from that crate digging i began to find ideas and samples. I was inspired by Eric B & Rakim, by Public Enemy, but most of all by Sir Jinx and DJ Premier.

From all your years of digging what is the one vinyl you treasure most?

I don't know...I consider my entire collection as a treasure. If I had to choose one maybe it can be one of the first Thelonious Monk recordings with Coleman Hawkins quartet - I think it was released around 1948. In regards to hip hip records I think my treasure is The 45 king - The 900 Number.

What do you think makes your beats/production unique?

I prefer not to talk about uniqueness in my productions. I think you can find in my beats some knowledge. I believe that hip hop should sound a certain way. As I said I grew up with this music and have been listening since the late 80s – I think can still hear inspiration in my music from the likes of NWA or Gangstarr. What can I say man I’m old school in my ways!

On my YouTube channel you can find some of my old remixes and some examples of my Sound Design work.

For beat inquiries or production you can contact me here JPBalboaBeatz@gmail.com

Thanks for taking the time out from your busy schedule JP. Have you any final words?

First of all thanks to Praverb.net for this interview. I feel honored!

To all the beat makers, DJs, MCs, writers, breakers or simply hip hop lovers: keep doing your thing and keep it real. Keep this culture alive! And last but not least thanks to all those who support my music...thanks a lot! Without those people I probably would have stopped making beats...

Just want to thanks to my wife cause if we have to go out, she's all dressed and beautiful, but
I'm stuck in the right sound for a snare, she doesn't get mad but patiently waits or even she waiving...
That's love!!!

"I never even thought about whether or not they understand what I'm doing . . . the emotional reaction is all that matters as long as there's some feeling of communication, it isn't necessary that it be understood" - John Coltrane


This interview was put together by Craig Hosie CEO of Belive Records.
Email ThisBlogThis!Share to TwitterShare to FacebookShare to Pinterest
Labels: Behind the Beats, JP Balboa
Newer Post Older Post Home