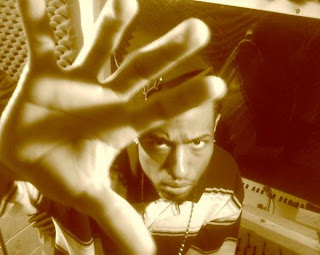 First and foremost, how are you doing today?

I'm blessed. I'm breathing and I got my health.

Introduce yourself to the masses, Nametag is...

Nametag is...human first, but overall a music artist, an emcee to the hip hop genre.

I have been a fan of yours since I first heard you on The Rhyme Royal Mixtape due to your excellent lyricism and pinpoint hooks. What motivates you in regards to rhyming?

You took it back a few with The Rhyme Royal Mixtape. Normal everyday experiences and just hearing a good hip hop record motivates me to want to rhyme.

Well, it's a natural chemistry. The both of them put me up on a lot of good music period as I was growing up, not just hip hop. They have an ear for good quality sound and I consider them both perfectionists, so automatically when making a record it's natural that I bring my A game for certain if they produced the song.

Yes, I definitely want to venture out and work with international artists. I want to develop a brand worldwide, not just in the U.S.

There are soo many dope projects dropping this summer. Do you feel that hip-hop is cycling back to the presentation of lyricism and raw skills?

As an entertainer, you're a brand and I feel it takes more than you just being an entertainer to represent your brand. This is where merchandise such as t-shirts, hats, sneakers, etc. come into the picture. When you're a music artist, of course getting heard and selling your music matters but your fans and supporters can only listen to your songs, but they can't wear them and look cool. Lol. It sounds a bit corny but you get what I'm saying. I aim to expand my brand.

You are currently wrapping up Classic Cadence 3: End Credits which will be available for download soon. What do you want to present with this mixtape?

With CC3, as with the previous ones, my goal was to create a project that caters to just pure emceeing as far as rhyme structure, rhythmic flows, free verse all which pretty much defines "cadence". I want to present doing that by providing replay value for my songs so they can be considered timeless or "classic". That's how the title of the series came about. So with Vol. 3, same goal in mind as the others, only better.

When did you first start working with Dub MD and how instrumental has he been to your success as an artist?

I started with Dub MD in 2008 when I was working on Courtesy Of Ambition EP. He reached out from the UK through myspace.com recommending that I should drop a buzz mixtape online before the EP and the rest was history. Since then my viral buzz has definitely increased and I established plenty connections as well that has been helpful to my music career.

People should support The Name is Tag album because...

Support The Name Is Tag album because it's substantial. It's a great quality album and it has a balance. It's not to underground but it isn't to mainstream. It's just right. Black Milk, Black Bethoven, Chris Sholar on the production. Then there's features from Danny Brown, Ro Spit, Cold Men Young and Street Justice. The quality is excellent. Plus, I did it without any label support.

The writing mood can strike at any given time. That first line is always the most difficult one to me, unless I have a beat. If I have a beat to write to, I study the instruments and patterns going on in it. I begin to mumble a flow with a bunch of gibberish, while having some quotables in mind. After that once I have the 1st line or two to jot down, the rest is "classic cadence."

What are some of your goals outside of music?

I would say to start a family and build from there and to obtain financial freedom. Family is important, and if not family, then love period. Art; I was a art nerd in high school, so I wouldn't mind tackling some graphic design and build an empire with that. I might even write a book.

Nametag's music differs from the next artist because...

You can't put me in a box. I'm truly diverse. Put me on a dope beat produced by whoever and watch what I do. It may come from the fact that I like all types of music. I've had "managers" tell me they wouldn't know how to market me. At first I didn't understand and found it insulting but later I found it as, I'm diverse, I'm myself and...you can't put me in a box. You can try but it wouldn't be to accurate.

What are your currently working on and who would you like to work with in the future?

I am currently working on different singles for my next official album Everything To Gain. In the future, I want to work with whoever is dope that I haven't worked with already. For those who I have worked with already, let's create some more authentic music. I could have named names but it would take all day.

I highly encourage everyone to go and buy my debut album The Name Is Tag available now at my website and all major digital stores such as iTunes, Amazon, etc. Classic Cadence 3: End Credits coming 5.23.10 For show bookings/features/press send all serious inquiries to booknametag@itsnametag.com I think that's about it.
Email ThisBlogThis!Share to TwitterShare to FacebookShare to Pinterest
Labels: Nametag, The Rhyme Perspective
Newer Post Older Post Home