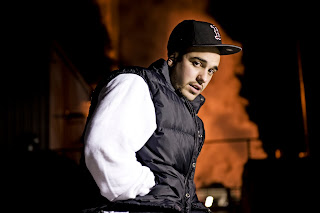 First and foremost, who is M-Dot and where is he from?

Thank you for having me my brother. We truly have been friends for years (don't worry internet nerds, it ain't no bias that P shows love just because we fam, we met in the first rungs of the music ladder many years ago, and have lasted thru the time passed, becoming friends over the course). M-Dot is, as you know, who I am, no gimmicks, just my initials, and way of thinking (through the many, lol, acronyms created since I started doing music). I was born in East Boston, lived in Revere most my life, and currently (when I am actually not touring) reside in Lynn (ATTENTION OBSESSED WEIRDOS WHO DEBATE THE EXACT CITY I SLEEP IN, I LIVE HERE IN LYNN AND ITS NOT A BIG DEAL, I DONT SELL CRACK OR KILL ANYONE, SO WHO CARES IF I LIVE HERE, I AM NOT SAYING I AM A KING PIN OF THE STREET GAME OR TRYING TO GAIN OFF SAYING I AM FROM "LYNN", I JUST WORRY ABOUT MAKING MUSIC, NOT WHERE I CLAIM, LMAO, I AM FROM BOSTON OVERALL AND NEVER WILL STRESS OR ARGUE WHICH BOROUGH EXACTLY I REP, COME ON MAN, I AM JUST SHOWING LOVE TO MY FRIENDS WHO ARE PROUD, AND I DON'T CARE BOUT THE SMALL SHIT). Good Music is good music, that's all that matters.

You are an artist who has a crazy work ethic as evidenced by your success gigging and consist material. Where does the passion originate from?

My family. We didn't have much when I was younger. Shared a room with my younger sister for awhile with a sheet dividing us. I am not complaining at all, just made me appreciate everything/Thats the key!! Trust me. I never complain if a radio or site doesn't post or play, they will eventually if I do enough. And P, you have seen that first hand. My dreams have come true, cause I have never expected to be given anything. No matter what I have may have achieved, I always wanna do more. That's the truth. Its never enough. Think about it, I come back from touring Europe for a month for the 3rd time, signing autographs, shooting videos that will be on MTV out there, getting paid to rap, and come home and still so many people (non hip hop fanatics) don't care or even know maybe who I am. That's my drive, just knowing I am nothing in the grand scheme. Hoping to break the barrier without compromising my dignity. My family really instilled that. Anybody who knows me can attest. This shit is a dedication, everyone raps, you have to have a resume'. I'm on Vinyl, been flown around the world, worked with my favorite artists, but its petty in comparison to the big picture!! These other rappers are my drive, cause they tell people they rap, but have never done a real show or released a project, and the people they feed this non-sense to, doubt me when I say I am an MC (because they are drowned out by the garbage). Separating myself is the goal.

Was there ever a time where you thought about giving up on music? What fueled you to continue?

NEVER. Motivation has been the fact that there is no other option. Once I start doubting I need to quit. I got my son who is 4. If I feel I can't properly succeed then it be disrespectful to him to continue (my girl as well). I have come to far. And clowns can hate, but with money and even 20 years most "rappers" will never see these dreams come true. I am not bragging at all, just saying I am privileged to have been able to reach a point where fruits are experienced. Dedication is the main component. Nobody cares how dope you are in your hood, lol, expand, think broader and work for it.

2010 was a great year for M-Dot due to the success of RUN-MPC with Dj Jean Maron. Can you explain the process involved with working with an international talent?

Jean (Dj Jean Maron) is my brother. That dude really looks out for me. He helped ste up a tour where all my food, flights and everything where covered (shout outs to the clothing line Oto10Dakt for sponsoring me as well). Not to mention Jean has kept his word on everything since we met. We have toured Vegas and worked with so many premier artists together. Shout outs to all the International artists I have worked with. Europe genuinely appreciates Hip-Hop. Jean and I have had many ups and downs, plenty of disagreements (the language barrier isn't easy) but we have stayed consistent with maintaining that the final product still result in GOOD MUSIC.

How has the internet impacted your career?

Internet is the best and worst thing ever. On one side it has helped me expand to so many countries around the world. Posted me on sites where people can see and hear me. Unfortunately tho it has given a window to 90% of the garbage to flood the net lol. It has been instrumental for me tho, I can not complain. I just feel like these cowards who go on sites under fake names (or even worse as themself, showing there fixation) and talk shit in blogs should really question there existence, how do you sleep at night knowing you are that obsessed pussy, lmao. I am in other countries chilling in paid hotels, eating paid food, after paid shows, listening to paid features I laced, while you bums are watching my videos, typing on your keyboard after your 9-5, hating your life.

You recently completed your third tour of Europe. How did this tour come to life?

You can revert back to my other answer. But mainly, Dj Jean Maron, French Clothing Line Oto10dakt, Dj Brans, Rev, Dj Loscar, Snowgoons, and so many others.

The comparison isn't even close. I love America, hands down. But Europe is still in love with the Underground. And Europe flat out just loves the Boom Bap still.

What continent does M-Dot want to conquer next?

Australia. I would love to travel there if they ever booked me (shout out to my brother from "Com Raid" Clothing, sent me some dope shirts). Hopefully I can work harder and gain there attention even more.

You have a connection with international beat makers and artists as evidenced by your collaborations and discography. Which international artists would you like to work with in the future?

M-Phazes (make sure he sees this lol), Edo showed me his beats 4 years ago, wish I jumped on it then in hindsight. Again though, to many to name. Maybe that chick who did that song with Kanye "American Boy", that shit was hot, her too (lol).

Last year, you released Making Doubters Over Think and you received numerous awards. Was this project a reality check for the critics and haters that doubted your drive or ambition in the past?

Yes. Just to be like her is free music, better than music you pay for. And the crazy part is, 90 percent of for features I did for other projects. Meaning it was a culmination of songs that I was featured on, and compiled for a tape. Like the Snoowgoons songs, Dj Booth Freestyle, Big Pooh/Explizit One track, T-Banga Track (RIP) and so many more. Cool when you think about it. Def shows I don't half ass verses I do for others, cause I used it for my own tape. Just was consumed with features and tours, and figured why not release them all together on one project of my own.

EP with Quit Nyce (Radix), production on it is something I am really gonna be proud of. EP with King Magnetic (AOTP). Full tape with Krumb (been working on finishing this for awhile). Full LP with Expilzit One (my brother from Lynn). Cd with Red Eye (The Closers) An EMS mixtape...AND FINALLY MY FULL SOLO LP (that will be awhile though). Less features, less mixtapes overall. Complete projects.

Happiness. Enjoyment of ones life. Not artificial, a real smile at night when the sun sets. Family.

You also have a great promotional team that is led by your crew EMS (Shout out to Rev). How do you guys continue to sustain unity in an industry that is based on individualism?

I have the best friends. People don't realize that most of EMS were my friends first, getting more into music as I became more committed. I truly feel Blessed to have so many daily say I inspire them. Many now do this full-time, because they witness anything is possible. I will never stop saying, its about putting faith behind one as a unit that helps you succeed. The sooner kids understand that the better. 7 different wannabe "stars" will never accomplish success with individual goals. Put your money and efforts behind the lead horse (someone who invests there life in this, no backup plan) and use any light he/she gets to propel yourself, knowing your time will come, and if you are dope enough, then patience is a virtue. You know for a fact, once one gets through, than you can now have an easier time.

Shout out to Rev, that's my living breathing brother (runs the internet while I work on recording/tours). Also shout out to Vegas Mike.

P, I love you man. Thank you for having me. You know how far we have come. You member when I would be on blogs legit 10 years ago, and I was off beat with my rhymes. DAMN MEMBER THAT. I never let that detour me. Just wanted to improve and prove people wrong. Skip to 2011..lol, still can't believe we doing half the stuff we doing, seen half the places we seen, its a trip. Hard work. I promise you, I really don't think people will EVER comprehend the shit we have to eat coming up. And through all the awards, paid tours, legendary features, radio play, major music videos, I STILL DAILY, GET TOLD NO, IGNORED, BLOG HATE, AND DOUBT!! But that's why where here...MAKING DOUBTERS OVER THINK!
Email ThisBlogThis!Share to TwitterShare to FacebookShare to Pinterest
Labels: M-Dot, The Rhyme Perspective
Newer Post Older Post Home