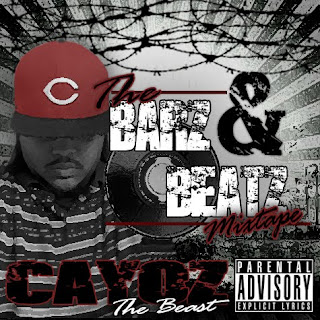 First and foremost what is the concept for The Barz and Beatz Mixtape?

Well as some may know I've dropped three solo mixtapes and two mixtapes with my side group STILL FRESH (with CTK).

This time around I wanted to showcase my growing production talents more than emceeing. Therefore I decided to enlist just about every artist I know, allowing them to showcase their talent over my beats. That way what ever type of promo that is received will be spread to the featured artists as well as me.

So, this project will include production from solely from you. Do you believe that presenting yourself as a dual threat will increase your longevity in the game?

Yes this Mixtape is produced entirely by yours truly. I believe that in today's growing industry, it's important to be well rounded by being able to do a bit of everything. For example, one day an artist might come to you seeking production and not a verse. Other days it might be the other way around, or in my case I also dabble in graphics so I get asked for graphics a lot as well. Anyway to back track a little bit, I would think longevity is what every artist is seeking right? so if you are a double or even triple threat, why not use all the tools you have?

Who are some of the guests that you have lined up for the project?

Ohh man there's quite a few features on here, somewhere around like twenty three or twenty four. To name a few though, I got my fellow BrainStormers O*Zee, Dj Grazzhoppa, and Praverb The Wyse. I got some of the homies New york and Jersey by the name of Taktikal, SageInfinte, and P-Hill The Genesis. The list goes on really haha, there is just so much talent accumulated in this single mixtape. Ohh yeah and also there's this young wrecking machine out of Lake Charles, Louisiana named Lil $am. He's going to be featured on about 5 or 6 out of 18 songs.

Are you working on anything after this mixtape is released?

Well as far as future projects, I'm actually in the middle of an album that's going to be released next year. The title is gonna be Behind The Moniker, its pretty much going to focus around me being viewed as the artist Cayoz by the masses. As well as showing a bit of my personal side that people don't normally see. Also The BrainStormers and I are looking to follow up on our EP that we dropped in January. Either way im going to be a busy dude.

A casual fan can hear the emotion and passion in your delivery. Where does the emotion originate from? Is it a byproduct of life or experimentation?

That's a good question, nobody has ever asked anything like that haha. As far as my emotion goes though, it stems from a lot of things. You know in 22 years I've seen a few family members pass away just like any other person. Parents split up, this that and the third. I think with me though the process in how it happened was different. There was a certain two years in my life where things where just hitting me continuously. For example, sometime in like 2008 my last living grandparent and my father passed away within like two months of each other. Things like that stick with you no matter how strong you try to be. Other than that, the transitioning from a teenager into an adult also impacted my music at one point. I have a certain level of aggressiveness as well but who doesn't haha?

Describe your writing process to the masses?

My writing process is kind of like "winging it" actually. I write on my phone so, I might write a few lines then stop and do something else. Then when I think of something to add on I'll go back into my phone and add what I just came up with to what I previously wrote. Before you know It I might have a complete verse/song without any beat playing. Now people may look at me like that's weird but, I believe if you write something you should be able to recite to any beat. Also the time in which it takes me to finish something depends totally on the depth of the concept. In other words, my process is totally unorthodox.

I know that your work ethic is crazy and you motivated myself and A.L. Laureate to deliver some stellar verses on The BrainStormers EP. Does your approach change when you write for a solo track as opposed to a collaboration?

I would say my approach changes. This is how I look at it, When I do a solo track I have two standards to meet. That is "my" standard, which pretty much means just making the whole track cohesive. Also making sure each verse is just as strong as the other. Secondly I have to meet my listeners standard as well. Now when I do a collab, I feel like i gotta meet both of the previous standards as well as the artist I'm collabing with. Can't half do a collab ever, that's almost like burning a bridge so to speak if its noticeable. With the BrainStormers project my mind state was like "Yo I'm the youngest dude in the group, I also got this kinda high pitched voice. I got to find a way to shine!". Real talk man that's how I felt, also I was invited into the group cause Praverb and A.L. Laureate both saw something in me. So pretty much I had to show and prove.

There's a few ways to get in touch with me actually. My twitter is @CayozDaBeast, I have mobile twitter so I'm always on there. Same with my Facebook. I try to respond to every message/comment. If anyone has any inquiries my artist email is CayozDaBeast@gmail.com (No spam please lol). Also if you need to stay up to date on anything I do you can visit my artist blog at Tumblr.

Lastly I would just like to give a shout out to anyone who has been down and supported my since day uno. The whole BrainStormers fam as well as its affiliates. I also want to tell Praverb good looking out all these years. People don't understand how much respect I have for this dude. He was only one of two people that would collab with me when I was a little young over energetic 16 year old haha. That's why till this day if he needs a verse or whatever it way be I'm down 100%. Everyone else? get in line real talk. I'd like to send a special thanks to anyone who featured on the new mixtape, that was a good look. Last but not least I would like to give a shout out to the label I'm with called Lets Get It In Records. Big G the Boss, L Boogie 64, Kayo J, Ill Nyce, and CTK. If I forgot you my bad but 2011 is our year get familiar haha.
Email ThisBlogThis!Share to TwitterShare to FacebookShare to Pinterest
Labels: Cayoz Da Beast, The Rhyme Perspective
Newer Post Older Post Home