Behind the Beats: P.R 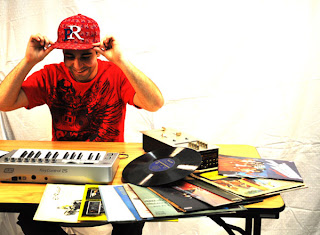 First and foremost who is P.R. and how long have you been making beats?

I'm a music producer residing in Sydney, Australia and I have been making beats since late 2006.

Recently you released a project with Iron Ghost called Bridging the Gap that features New York based emcee Ali Vegas. How did the collaboration come to light?

The Iron Ghost hooked it up, he got in touch with Ali Vegas through a mutual friend, and did an online interview with Vegas, from there, an opportunity came about for us to do a whole EP with him.

Describe the first time you met Iron Ghost and when did you guys decide on collaborating for Bridging the Gap?

I've known Iron Ghost for a while now, not only are we music partners and a recent production duo called Sound Kamp, but we are also friends outside of music. We decided it was time to make some moves together as a duo, because I've always been a solo producer, so this new step will open up a new chapter for us.

How integral was the internet in regards to collaborating with a person (Ali Vegas) who lives on another continent?

Honestly, without the internet there is no way I could of worked with the people I have and got to the places I've been. The downside to living in Australia and being a hip-hop producer is connecting with international artists, because my main markets are probably The States and Asia. So the internet has helped me A LOT. God bless it.

It's a solid hip-hop project, that brings forth that classic New York feel that people love and miss, with contemporary aspects to it. And how could you refuse listening to some dope bars from Ali Vegas.

In 2010, you dropped Pre-Heated which was hosted by Statik Selektah. What was the response to the mixtape?

The response for me was amazing, it got thousands of downloads, and made it on many blog-sites, and because it was basically my debut project, having someone like Statik Selektah host it was crazy! People showed me a lot of love and respect that I've never got for my music before, I started to get more noticed. One comment in particular that I remember was "This shit is too good to be a mixtape, it should of been an album."

Was it easy to link up with Statik Selektah?

We basically linked up when he came down here to Australia in 2009 for an event called "Good Vibes", he was DJing for Q-Tip, and I hit him up and told him I want to get him a side show/set, just for him.

So the respect and favors were exchanged, and Pre-Heated wouldn't be what it was if it wasn't for him. He's definitely one of my favorite producers of all time.

Promotion of the project with Ali Vegas will most likely keep you busy. After you promote the project what do you plan on working on?

Me and Iron Ghost already got another EP planned called Picture Perfect which will feature just local artists. So I guess we can help show the world what Australia is made of.

Who would you like to work with and why?

Wow, okay, there are so many people I would love to work with, but I'll name one from each category of musician: Male MC (Mos Def), Female MC (Foxy Brown), Female Singer (Alicia Keys), Male Singer (Trey Songz), Music Producer (Nujabes, if he was still with us - R.I.P.), etc, I could go on forever. If someone is talented, focused, original, and has a connection with my music, then I'll work with them.

Describe the hip-hop scene in Australia...

We need direction and more support. Hip-Hop here is starting to slowly catch on, but there is a lot of work to do.

What are three material possessions that you can't live without?

On a day to day basis, I would have to say: Computer, Phone and Wallet. Nice and simple.

Hit up my main site - I have my biography, discography, and links to my other sites all there.

Keep real/positive music alive! and always live life to the fullest with love and in peace! and of-course, shout out to Praverb for this interview! You the man!