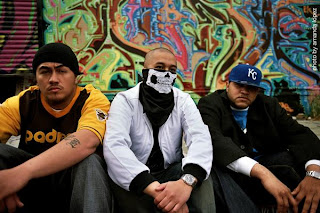 First and foremost, who are the members of Fortilive?

I know that you guys have ties to Hawaii. How is the music received in Hawaii? Describe the strengths and weaknesses of the Hawaiian Hip-Hop scene.

We are from Waianae, Hawaii. Its on the Leeward Coast Of Oahu.As far as the music we make, The "Hip-Hop" scene has taken to our music well. We are still expanding outside of the island scene, but Hawaii has been supportive. The strengths of the scene is the diversity in its sound, due to every bodies individual influences. Not to mention its still a young and rapidly growing scene. The weaknesses are the fact that there isn't a lot of support from the radio industry, and main stream media in Hawaii. So the scene has been more of an underground cult thing through the years. The other "Usual" factors, are also a part of it, but what scene doesn't deal with that?

Your debut project I vs. I contains 15 tracks of versatile material. What was the concept behind the project?

The concept was the same as it always is with us. Make Classic Shit. We don't over complicate the process, we go off of feeling.

!llmind produced a majority of the tracks on the project. Will future releases include production features?

With that being said, who does Fortilive want to collaborate with in the future?

All the artist who influence us. People like De La, Dogg Pound, Outkast, Duck Down, Dj Quik, and more. they are the O.G.s we would like to work with. Also the cats on the rise right now. People like Kendrick Lamar, Big K.R.I.T., Freddie Gibbs, Pac Div, etc. We down to work with anybody who's dope.

illmind always pushes us, and we try to push each other to make the best possible music we can. Its all chemistry.

What are you guys currently working on?

We plan on releasing a remix album, and we are going to release the word on that once we iron out the details. That'll be coming out soon, so all producers out there should be looking out for that. We also, working on a currently untitled EP, which will feature some outside production from some familiar names. That is going to be something dope so look out for that as well. We should also be dropping another full length Fortilive Project at the end of the year, so we are staying busy.

One thing that I noticed is you guys present a lot of industry knowledge courtesy of your Twitter page. Why do some artists shy away from helping other artists out?

That's because Mush talks too much (laughs). Naw if you follow Fortilive or !llmind on Twitter we always try to extend some game to people because few did it for us, but in order to make it, each one gotta teach one. Its good to share your knowledge. Why other artist don't do it, is simply because they are out for themselves, simple as that.

What is the best way for the masses to get in contact with you?

Just hit us on Twitter. Every ones individual pages are in our Bio, so hit any one of us whenever.

We appreciate you giving us the outlet to speak on some things and get our music heard. To everybody who has been supporting Fortilive, we appreciate all the love. We definitely plan on surprising you guys through out the year. Go Download that I vs. I project over at Dj Booth.net and keep shit Jim Kelley!
Email ThisBlogThis!Share to TwitterShare to FacebookShare to Pinterest
Labels: Fortilive, The Rhyme Perspective
Newer Post Older Post Home