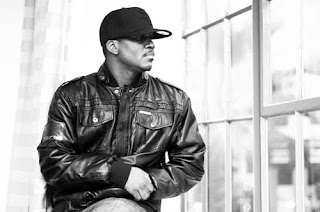 First and foremost, who is C.B. News and where is he from?

C.B. News is a artist from Fairfield, Ca, a small city in the bay area. I'm an artist who wants people to know my story and speak for people who can't speak for themselves and bring their lives as well as mine into the music.

In 2009, you released Soul Searching. What did you want to present with that project?

Would you change anything about the release of the project?

I would of promoted that project way harder. It reached a lot of people but I feel with some videos and other things, it could have reached even more people than it did. I would of kept pushing the project even after it was released but those are things you learn with each time out. With the internet being so helpful to ones career, with the youtube's, twitter's, and hip-hop blogs, I should of took advantage of that more.

You are currently working on a new mixtape called For The Love. Who will handle the production on this project? Does the project have any features?

Right now For The Love is in the infant stages. I have a few songs done for it but im taking my time because the day I release it has major significance to the mix tape and hip-hop itself. Right now the only feature is my homie Uptown Swuite who is well known for doing songs with well respected mc's. I've reached out to a few producers such as Numonics and Illmind which will add another element to the project. My producer Infinite tracks will Contribute heavy to the project as he did with Soul Searching. With features I'm going to keep them at a minimum but the ones I will have, will all tie in together and make sense with the project.

For The Love differs from Soul Searching because...

For The Love is going to be a little more personal and thought provoking. I'm going to be touching topics that a lot of artist don't touch these days. I want people who don't even listen to rap music to be able to play this mix tape. I call it relatable music, because it doesn't matter your line of field, you're going to be able to understand what im trying to convey on For The Love.

You have a completed project called Brief which is the prelude for the mixtape. What is the overall concept for Brief and who will you work with on the project?

Brief is a 9 song EP, which will feature production from Lee Bannon, Jansport J, Nefarious, Abstract Soundz and Infinite Tracks. This Ep is just a good collection of music I've been working on for the past few months and I felt the fans needed to hear it before I put out the mix tape. Get people familiar with me since its been a minute since I released Soul Searching. Its almost like my re-introduction to the world.

You have the uncanny ability to project your life into your music. Would it be safe to say that music or writing is therapy for you?

Most Definitely it is. Just like anybody else in life, I go through my own problems daily. So with my music I put it out there for the fans to see. I go to work on a daily basis because music doesn't pay my bills right now, a lot of people that listen to music have regular 9-5 jobs. With the music I try to speak to them and give them a voice. I make music for the common man or woman, I'm not a super star and I think that's what makes my music come across the way it does. I can only make music on things I've seen and been through.

Can you describe your writing process for the masses?

I don't write my rhymes down,(laughs). I'm just joking, I still write my rhymes with my pen and pad. I know that's boring these days with people either not writing or writing rhymes on the blackberry but I write everyday even if its not for a song. Its like practice for me, I usually will name the song first before I even write any lyrics or chorus and then I'll go through concepts or ideas of what I want to write, after that I just go into my own zone and the process begins. At times I'll play some different type of music such as Radiohead, Coldplay, Nirvana before I write or even while I'm writing, it just puts me in a different mindset.

What are some of your interests outside of hip-hop?

I'm a big fan of sports, so I'm watching everything on ESPN. Basketball and boxing are probably what I watch the most. I'm also big into shoes so I'm always staying on top of the hottest kicks, going to mall and other spots, trying to get the most exclusive kicks i can find. I'm trying to get back into collecting and reading comics, its just hard to find time to go the local spot and get back into it full nerd mode.

You can reach me on Twitter. I'm also in works on a website which the fans will be able to watch videos and listen to my music at any given time.

Thank you to all my fans and readers of this website. Brief will be out in May and I'm about to release my debut video for the song Cool Out produced by Nefarious. The video will be out next week on my YouTube channel. I'll be working hard on For The Love and it will be out later this year. For all my all fans feel free to hit me on the twitter and God bless everyone.
Email ThisBlogThis!Share to TwitterShare to FacebookShare to Pinterest
Labels: C.B. News, The Rhyme Perspective
Newer Post Older Post Home