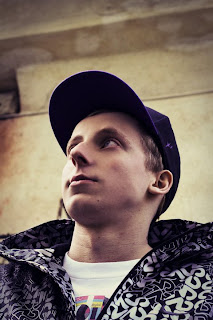 First and foremost, who is Inphy and how long have you been making beats?

Inphy is a 20 year old boy from the Czech republic, currently studying English language and literature and making beats under the TyNikdy Label. I've been making beats for over three years now.

Last year you released The Remixtape which consisted of 14 remixes over your production. What did you want to present with the project?

At first I wanted to make a producer's album. But then I realized that people don't know me, that emcees won't collaborate etc. So I decided to make a remix album, because a lot of acapellas are the vinyl or the internet. I also like the fact that I could work on that project anytime I wanted, that I was the only one responsible for all the work.

How was the project received?

It was generally well accepted, all the "major" Czech websites wrote about it, I got in touch with a lot of rappers/beatmakers, so I was really happy. I had this idea for the intro, that people I remixed or I knew at that time would give me shoutouts and I'd put them over the beat. Sadly it didn't work out, because a lot of them either didn't have time or didn't respond at all, but some gave it a shot and told me that it was a really good job, which meant a lot to me.

The bonus track on the project provides the only Czech remix and it is called "Lidi jsou zvlastni." How is the hip-hop scene in the Czech Republic and where do you fit in?

The hip hop scene in the Czech republic could be divided into, lets say, three groups: the mainstream one (meaning the people that are the most "famous and visible" in here...Some are good, some are bad), the underground one (people releasing their own stuff independently and are mostly good) and the lame one (I guess the name speaks for itself). I guess it's similar to the situation in the United States actually. And I would put myself in the underground group.

The internet has made it possible for this American based emcee to catch wind of an up and coming beat maker from the Czech Republic (Thanks to Last FM). How beneficial has the internet been to you in regards to your beat making career?

The internet is a great and bad thing for music. It opens up a lot of opportunities for unknown artists (like me) to get heard, which is great but those artists can be both good and not so good. Sometimes you gotta dig through a giant pile of bad stuff to find a good or a decent beatmaker/emcee.

Nevertheless I LOVE finding new artists/beatmakers (for example: ESTA, Shlohmo, guys from Louis Den (Kelakovski, Kosyne, Jaisu, etc.) and I love the fact, that it's easy to get in touch with them via twitter or something like that.

In five years Inphy will...

Hopefully finish with school, make a producer's album, make a LOT of beats, learn a lot of new things and be happy. I don't like planning things really far into the future, because usually when I do - it never works out :)

The strength of your beats is definitely your percussion. It seems that you take pride in your drums and your sample selection. Where does your inspiration come from and who did you listen to growing up?

The inspiration definitely comes from 9th Wonder, Kev Brown and J Dilla. I love their work, I've been "studying" it for a quite a long time now and I have been listening and digging for their samples to help me find my own way. I'm not trying to bite their styles and what not, but when you're influenced by someone, it's a given that you will sound similiar to them.

One is the biggest misconceptions about Inphy is...

That I'm some sort of a bad ass. :) I mean...when people see a rapper, producer or even just a person that listens to hip hop, they automatically think that they are some sort of a wild person, that drinks all the time, smokes weed or something...And yea – I bang my head like crazy when I do a show/make a beat/listen to some music, but otherwise – I don't talk that much, I'm usually a calm individual and...surprise surprise...I don't even drink alcohol and actually never have.

What are you currently working on and who have you worked with in the past?

I'm currently working on my producer's album, meeting new people, getting to know how the industry works. I'm actually pretty busy right now, with the school and all of that, but I'm glad that I got this far.

Who would you like to work with in the future?

Definitely Evidence and Little Brother (or at least one of them). I've been always saying that I want to work with these people and then I can live/die in peace. :)

I'm on Twitter, Facebook, Bandcamp, Soundcloud...I'm on a lot of sites, actually. If someone should find my personal profile – don't send me messages there/don't add me as your friends if I don't know you, please. :) To get in touch with me, hit me up on twitter or at inphy1 at gmail.com.

I really appreciate that you have given me the opportunity to make this interview, I hope my English is on a level where I can answer in (at least) a decent way. :)

I would like to thank everyone who got this far in the interview and didn't get bored, everyone who have downloaded/heard my music, everyone who passed it to their friends... It really means a lot to me. Thanks! One!
Email ThisBlogThis!Share to TwitterShare to FacebookShare to Pinterest
Labels: Behind the Beats, Inphy
Newer Post Older Post Home