Behind the Beats: Dirty Hairy 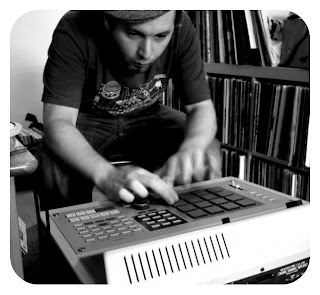 First and foremost, who is Dirty Hairy?

He Is the scruffiest, loveliest, jazziest cat you'll ever meet with an MPC... hahaah, just kidding. He's a nice fella trying to do good, and challenging the wack cats.

Your style of production is creative and jazz infused. How hard was it to find your style over the years?

Not so hard it just took some refining, I was playing instruments and experimenting with equipment in my bedroom as a teenager before I settled on the idea of hip hop beats. When I started on a sampler I was sampling everything (I mean every genre) as well as myself playing guitar and bass hooks or live drum loops on my kit. The Jazz came up from just playing in bands, improvising and dj'ing funk on the side. Not to mention being a huge fan of jazz in general through the influence of my uncle. I kinda didn't think I could have an idenitity as a producer if I sampled every genre (which is a little close minded), plus Jazz offers, more of the notes, harmonies engineering and mastering techniques that I enjoy to hear. I find in Jazz releases that there is rarely two recordings by an artist of the same song played the same like note for note and I believe there are more Lp's available with just a single musician or duo recordings than other genres, which is great for layering sounds and chopping (certainly in the way I look at it). Chopping up Soul or Funk, no matter how rare it is, gets boring to me and too many people do it...but I like to hear it when cats do it really well or even just find a dope loop...I like the improvisational roots in some of the sub genres of Jazz, it inspires me.

What was the concept behind the Jazzfanatik mix tapes?

A mixtape of hip hop instrumentals with Jazz samples that I dig and own on vinyl. Something I could cook dinner to or just throw on and take a break from the lyrical side of Hip Hop. Also something for my friends or any open minded emcees that may find some inspiration for writing rhymes or building. Certainly to me it was nothing groundbreaking...But it came out pretty much how I planned it and I just wanted to litter it with some shout outs from Dj's and emcees I respect in amongst the music and throw it up on the DL for people to hopefully enjoy...

The concept in short was just about throwing together some nice instrumentals...Jazzfanatik 2 people have asked to be put up, but it's just a mixtape of jazz tracks that where used in Hip Hop, so its a very different feel. When I find that tape I will upload it to Soundcloud just to confirm the disappointment...Jazzfanatik Volume 1, is full of tracks with emcees and little interludes of jazz instrumentals etc but as a whole it's about my love jazz..

What was the concept behind the Pellamentals mix tapes?

work with Dj Chill alot who is from Sarajevo now living in Zagreb. We are the same age live in the same neighborhood and have similar records when it comes to hip hop and 12"s. We just wanted to make together a mixtape (for free) that involves pellas and instro's but all jumbled up and mixed together vinyl only. I actually got inspired by a Dj and good friend from the Uk called Mr Krum who made a mix tape called Put a Beat To The Rhyme which was essientally the same thing, but Krum is older so he's got them mad rare 12 inches, plus his selection is DOPE...

Pellamentals was definitely inspired by that concept, but because we're a little younger than Krum, we tried to keep it mid 90s and forward with the tracks (it sort of felt like they where the tracks we where really paying attention the most when they came out, even though on both volumes we do creep into the 2000s a bit and some early 90s too), Krum went from like 1988-1995 or something? and made one of the most inspiring mixtapes i have ever heard...Mr Krum for president!

Describe the hip-hop scene in Croatia...

Shocking, terrible, inconsistent. But this is just the worldwide aftershock in my opinion of the fact that nothing is happening in the USA and if you think Tyler the Creator is happening...Go Home...(I mean in a large volume of fresh artists coming through). The fact that the Croatian hip hop scene exists and and at one time it was potentially the strongest of all the Balkan countries, is a great thing...I'm happy to be a part of it in a very very small way, helping some artists who respect or appreciate what I do. Through time I have become really good friends with some nice dudes here and watching them develop and trying and push boundaries within what they have learnt in life is exciting. Croatian emcees and producers have a lot of potential , and the music and content at this stage can only rise. But the lack of distribution, of not just music, but equipment for producers to get their hands on is scarce and that has a big effect.

Croatian rappers (many don't even own a mic), flow great and have some awesome freestyle skills. We have some great story tellers and really original concepts. Although whatever happens in America within hip hop every other country in the world will copy or duplicate to feel like 'well hip hop came from America so this must be the latest thing '-whether you want to believe it or not.

It used to be that those little Nokia 8810 mobile phones from the Charlies Angels film that where all the rage, or Cherry Coke or Ipods, maybe Shakira, maybe Gaga, re-issued Nike Air Force Ones and now Ipads. But now the latest thing is if you are a rapper get a band! and for me this is the recent thing to come and damage hip hop. Yes! yes! yes!, I have a band Wooooooooooo!!!!

I guess it's a little like having a dj although none of your musicians actually listen to hip hop, which make YOUR songs sound worse live, and you get paid less...WELL DONE, it seemed like you where doing something different from the start didn't it??? but really you just helped in ruining hip-hop. I believe the expression is , "shot yourself in the foot"?

Djs with skills and emcees with skills, thats all I want to see. Even the Roots are boring now.

You are apart of a talented duo called Dirty Treats (with Ill Treats). Has the move affected your relationship with your beat making hombre? Will the masses be treated (you like the wording haha) to material from Dirty Treats in the future?

Yeah nice wording ha...no absolutely not...Treats and I moved together at the same time in our lives, from musicians, to Djs and then producers. We pushed each other and still do...I speak with him every few weeks, he's deep in some projects, I'm deep in some projects. The music is something we will get to when current paths are clearer. We put in a lot of work so we agree that we owe it to ourselves to just finish these joints and press them up on vinyl as planned...So the move didn't effect anything in the relationship but it certainly effected how we work, now because we have some other things happening which forced us to put it on the side until we feel inspired to return to it. The masses will be treated at some point. It is hard to work now living in different countries and procrastinating a bit. We both joke that even if we end up being 50 year old dudes and putting out out it absolutely positively has to happen.

Describe qualities of the perfect emcee...

Content, ability to write rhymes immediately to a beat if it really inspires them. Cadence, flow, someone that can freestyle (not just on that shouty battling tip) or someone who has a wide vocabulary, but like Guru said "it's mostly the voice."

What artists would you like to work with in the future and why?

It would be nice to do a tracks with J-Live, maybe Yeshua Dapoed, Capitol A, Gift Of Gab, maybe resurrect Jeru's career, PUTS, El da Sensei, Edan, Lif, OC, I dunno...I'd like to work with these guys because they sound nice on the mic because of all of the above reasons (the answwer to the previous question).

Just finishing the Navrat Nanos EP with an Emcee called Toxz - it's his first demo, I made all the beats. He is from a region of Croatia called Slavonia. He is a young and great guy. He is also a great emcee with great freestyles. Good topics and ideas will be presented on his debut.

I Produced 3 tracks for another Croatian emcee by the name of Kanđžija for his second album. He's really an open minded guy in the Croatian scene and pushing himself.

I'm also about 7 tracks into an album with an emcee called ShutEyes from Buffalo NYC. The project will be jazzy, boom bap, and include breaks, cuts etc...Shut is a great emcee and producer and Dj. He is underrated and works very hard...We're pricing up a vinyl only release on this one, and this is really a lot of fun to work on.

I have a vinyl only funk mix tape coming up on the solo tip and a project with Dj Chill called Start/Stop II. Finally I have a 10 track LP with remixes of some of my favorite Croatian artists, which will be available for download via whatever people use these days, most likely Soundcloud or something.

I'm also shooting a documentary about digging vinyl in Croatia, and it features, some of the top diggers I have met on my travels.

How can the masses get in touch with you?

Go to your nearest beach and find a shell in the shape of the Wu Tang symbol. Face South East, with prevailing wind and blow into it like a kazoo - the chord of c major 7...Within 7 seconds, a 3 and a half foot woman will appear before you wearing yellow hi top Pumas and rocking gold teeth. She will produce a silver tray with a selection of wafers, cakes, and biscuits...Select the biggest cake with the cherry on it and bite exactly half of the cake. Then take the remainder of the cake and rub it frantically on your forearms until these addresses appear.

Not really...Take care of yourselves and each other.