Behind the Beats: Dela Speaking on Translation Lost 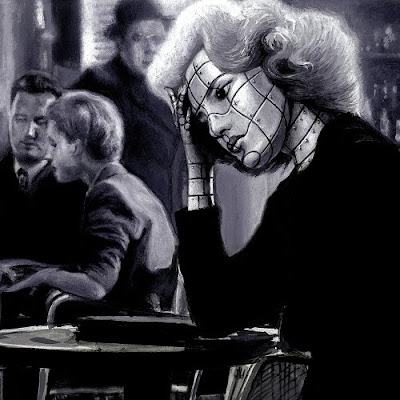 I recently read that you moved from France to Montreal. What was the hardest part about the move? Have you had the opportunity to travel back to France?

I'm actually living between Paris & Montreal. In Paris right now about to fly to Montreal next week. The move was not hard at all. Missed my equipment in Montreal though so that's when I bought a small MPC-1000. Records are very cheap there compared to Paris.. I find some crazy stuff. So lately I've been buying records, sampling and making beats in Montreal, and mixing & recording in Paris where the rest of my setup is.

Was the move related to business or did you want a fresh start?

Fresh start. Didn't even want to make music anymore actually. I had just finished Changes Of Atmosphere. We had made all the deals we needed for the release and it had been a very long and exhausting period of going back and forth with distributors, labels. A lot of shit went wrong, too. So then I was like ok I'm done, I'm never going through this again! But after 10 days I was back on the beats with a new MPC.

Translation Lost is your follow up to Changes Of Atmosphere and it presents some differences. Your debut record was feature heavy while this project has fewer features and the project showcases more of your beat making talent. Define the vision for this project and the struggles associated with releasing it.

It was dope working with so many talented MCs on Changes Of Atmosphere but I didn't want to go through that again. I mean it went pretty smoothly but it took a lot of time. Took us 3 years to get the album out. I think I'm leaning more and more towards instrumental stuff. At first I thought people would complain that there are not enough vocals on the album but it seems it's actually the opposite.

The album was constructed bit by bit. I didn't have a vision for it since day one. I just kept on making beats and it slowly build itself, the ideas accumulated and the more I kept going the more it made sense as a whole.

People should support this project because...

They should support it if they like it, that's it, simple as that.

I also enjoyed the versatility that you exhibited on the project and the creative titles that you used. Jay Electropietricus, for example, grabbed my attention when I looked at the playlist. Where did the track name originate from?

Just watching Michael Pietrus play while I was making the beat and thinking "he really does look like Jay Electronica," and then I think Jay twitted "Jay Electropietricus." I usually name my beats on the MPC using whatever is going through my mind at the same time. Could be something that's going on TV, something I heard, something that happened to me, something I read...It's pretty random. Sometimes I'll change the title afterward, but I liked this one so I kept it.

The features that you included for this project deliver stellar performances. I see familar faces on this project, such as Reach, Blu, and others. Do you have plans to release full length projects with any of the featured talent on the project?

We've talked about doing a project together with Blu, but it never got to the stage where it was like "let's go let's do it now," it was always like maybe, eventually. I need to hit him up with some beats he won't be able to pass on though! As soon as the time is right. We're doing a project with Kemizt, too. I'm really looking forward to this one, I'm giving my best and I really want to take it to the next level. Can't say when it'll be out, though, it's too soon yet.

I love the emotion that I feel when I listen to your projects. The choice of a sample has a lot to do with how fans react to instrumental production. How would you define the sampling selection process? Is It difficult or time consuming?

Definitely time consuming. I wouldn't say difficult. I just dig a lot. When I'm in Montreal I buy like 7-10 records a week, come home and just listen to everything from start to finish, at least once. The turntable is hooked to my MPC, so whenever I hear something I like, sometimes that moves me, I record it. Then I'll go back and flip whatever samples I recorded. Some I end up never using, some I only flip like months or even years later. But yeah I wouldn't call it difficult because I love to do that. Even when stuck in a dusty basement for hours going through piles and piles of vinyl, you gotta have the patience to sit down and go through all these records. It might seem difficult but it's really not when you it's your passion. Because you know you might find that crazy record/sample anytime. That's what keeps you going.

Who would you like to work with in the future if the opportunity presents itself?

I don't know, at this point I'm like I'm just gonna do my thing and that's it. Maybe when I'll be making the next album I'll make that one beat that reminds me of such or such artist and I'll be ok and I can reach out to him/her and see what's up. But yeah for now I'll be focusing on that project with Kemizt and we'll see.

I have talked to you numerous times in the past and I am in awe of your humble approach. How does your humble disposition aid you in regards to dealing with a variety of artists?

Thanks, well I don't think it does actually! I mean I don't know if I'm humble, I think it's more that a lot of artists are way more arrogant than they should be lol. I just try to get back to everybody who gets in touch. And I know sometimes I might forget to hit back somebody but I mean it's hasn't gotten to a point where I can't keep up at all. It seems a lot of artists, once they get a little shine they're done with replying their messages and shit. But personally it's the kind of stuff that keeps me going. Like when someone says my music inspired them, or made their everyday life even a bit better, that's really the kind of stuff that keeps me motivated. Because it's rough trying to make a living out of this, and it's not like I've been getting a lot of love from the industry people and the "established" artists. So to everybody who's been sending messages saying they like the music, the least I can do is take five seconds hitting them back with a thank you, because that's really all it takes. But yeah, I think it would definitely help me if I were more cocky with the industry folks. But that's not me though, so you know...

Will Translation Lost be available via vinyl in the future?

Hopefully. Working on it!

What is the best way for the masses to stay in contact with you?