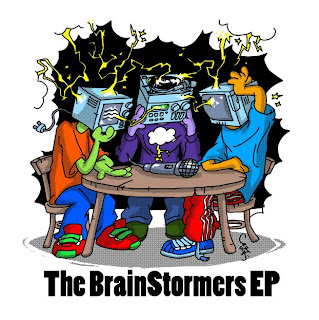 The BrainStormers were conceived due to the success of its predecessors. The Wu Tang Clan, Task Force, The Arsonists, The Jurassic 5, Slum Village, and most recently Slaughterhouse paved the way for the development of this group. Each member possesses a specific skill that is brought to the forefront. Cayoz Da Beast (by way of California) possesses poignant wordplay and a work ethic second to none. A.L. Laureate (by way of Florida) possesses an abstract style and excellent conceptual driven verses. Praverb the Wyse (by way of Virginia) possesses a finely tuned delivery and aspects of spirituality. Finally, Dj Grazzhoppa (by way of Belgium) possesses the ability to turn an ordinary track into a masterpiece. The true essence of this group is on display when they collectively attack a song. The BrainStormers are poised to make a mark in an industry that is cluttered with uninspired material. The latest addition to The BrainStormers collective is an emcee by the name of O*Zee. O*Zee (by way of Maine) is an emcee's emcee who also thrives with conceptual rhyming and raw lyricism.

Furthermore, this EP will serve as an introduction to the talented collective. Feel free to pass this project on various social networks, to your friends, foes, and more. Physical copies will be available soon.