Brandon Burris aka Point Game departed from this earth last week and I just wanted to express condolences to his family and those who were close to him. Brandon was a person that I connected with based on the sincerity presented in his music. Most song writers give you a glimpse of their personal torment to a point where you feel like you have known this person your whole life based on the emotional response that a song or an album evokes. I was inspired by his work and he expressed that he was inspired by my work. Brandon and I both lost our biological mothers, so a connection was formed based on trauma and death. Brandon was also a person who had a big heart and knowledge about religion; he was not ashamed of presenting his flaws (so-called flaws) to the world. I just wish that I had the opportunity to interact with this man more. I am not saying that my influence could had prevented the death of this immensely talented brother but I do believe that we could have assisted one another in dealing with depression. So please download and support (he has an album on iTunes called HipHopCrisy, as well as a feature on Spoonfull's new project) this brother who departed this earth too soon.

Listen to these releases and get to know Brandon Burris: 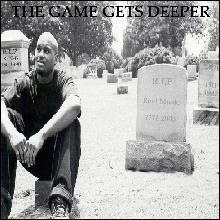