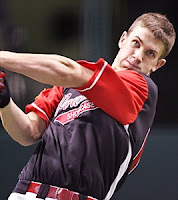 16 year old baseball phenom Bryce Harper will drop out of high school (and complete his GED) and enroll into a community college with the hopes of being selected by a Major League team in the 2010 or 2011 MLB Draft. Ron Harper (Bryce's father) understands that critics will question the decision but he stated that Bryce initiated the decision. The decision can be viewed as a calculated risk. Bryce can either live up to the predictions or he can level out. A 16 year old hitting the ball 500 feet and throwing a 96 mph fastball is crazy. Bryce has been dubbed the baseball version of Lebron James and he has graced the cover of Sports Illustrated. This news may be disturbing to some but if Bryce lives up to his billing then he could become the face of baseball and restore a shattered past time.
Email ThisBlogThis!Share to TwitterShare to FacebookShare to Pinterest
Newer Post Older Post Home