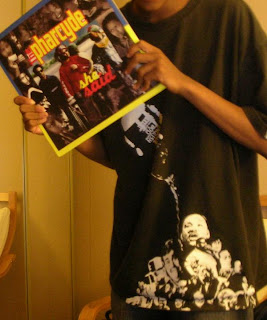 It is so rare to find someone who loves old school music especially someone who just finished high school. Nefarious is a person who would rather stick out than follow the masses perception of what is hot. Nefarious, a young beat maker from California, took the time out of his busy schedule to answer some questions. The mythological legend is bent on world domination and becoming a household name. Get familiar with Nefarious!


First and foremost introduce yourself to the masses.

Yo, my name is Nefarious! and I am a hip-hop producer out of Hayward, California. Reppin' the Bay Area.

Who are some of your musical influences? Who or what inspired you to start making beats? and what does the perfect beat consist of?

My musical influences range from producers like J Dilla, Madlib, and Nicolay to groups like Little Brother and De La Soul. I was inspired to make beats out of necessity. I started out as an emcee who needed beats, I eventually put the mic down for good and took up producing full time. The perfect beat... That's a hard one. The perfect beat would be a beat that can tell a story and move people emotionally without the aid of an emcee. A beat that you can listen to on repeat and forget that you've been listening to it for hours.

I listen to your material (on a regular basis) and I notice that your projects focus heavily on soul samples. What group or individual do you enjoy listening to when you are in a beat makers block?

When I have block I listen to Wu-Tang while playing Halo 3 Online until I feel motivated again (laughs). Seriously though, I'll listen to jazz music to calm my nerves.. Mostly Yesterday's New Quintet or anything else by Madlib on the Jazz tip pretty much.

Has the Internet helped you in terms of gaining fans? How So?

The innanets is the best tool for putting people onto your music. I get most of my fans from my YouTube videos where I make a beat and play it afterwards (and eat). That was before blog sites started messing' with me. It seems like being plugged on a reputed blog site is better promotion than having your song on the radio nowadays.

With that being said explain the thought process that is involved in your beat making videos that are on YouTube? Do you feel like you are a mentor to others who want to become beat makers?

I usually just turn the camera on and forget that it's there. I just make a beat how I normally would and edit out the boring parts and parts I don't really want everybody knowing (laughs). I feel like I provide help and maybe a little inspiration for those who are looking into making beats. I get a ton of emails and messages from people asking for help every day. It is pretty overwhelming but I try to respond to everyone.

Explain the concept behind your latest project More Than Music? How long did it take you to complete the project?

More Than Music was a collection of beats I made that stuck out to me for some reason and I guess it's to show that it's More Than Music to some of us. A lot of people who don't make music might not understand that a song or a beat means much more to the person who created it. It took me about 2 weeks to complete the project. I was just feeling weird one day and grabbed the dopest beats that weren't previously released and put them on a project. 5 days later More Than Music dropped and now I'm getting a lot of positive feedback for it.

My homie Indy Sparks did the artwork. He is crazy with the photoshop. Dope emcee also. He dropped his album the following Sunday called Circa '09. Dope rhymes. Very talented cat. You will hear much more from us in the future also. Me on the beats, him on the rhymes. Iller than swine.

Albums nowadays tend to be emcee heavy in regard to an extensive focus on lyricism. Do you feel that beat makers are under appreciated? How So?

I think beat makers are under appreciated because beat tapes are not for everyone. I have had multiple people ask me "Where's the rapper?" and it's frustrating because you put your everything into a project and it isn't enough for some folks.

When people listen to music they are usually exposed to the personality of an artist. How do you plan to convey parts or portions of your personality without lyrics?

Most of my beats DO infact have lyrics. Sometimes I chop the vocals to say something and it isn't on accident. It goes over most people's heads, but I do get messages from random folks saying they 'think' they heard something.

I also observe that you are apart of Cosmic Soul Collective and The Soul Dojo. Does the interaction with like minded individuals motivate you to become a better artist?

It helps me improve my craft because there is always that competition. No one wants to be the weakest link. We have big dreams with the Cosmic Souls Collective stuff. Be on the lookout for releases by us soon. As for The Soul Dojo I'm not sure what I want to do with the site yet. Might make it my own site where people can just see updates on what I'm working on and stuff like that.

Describe the likes and dislikes (your pet peeves haha) of working with emcees?

I like working with emcees because more people will listen to it for longer. Like, that track For Your Love ft. my homie J Nolan, if I released that as just an instrumental it never would've gotten as big as it did. The downside is it is hard to find emcees who are serious about what they do, so I have a lot of beats I gave out and haven't heard from the emcee in months and it is just a big waste of time.

Which artists would you like to collaborate with in the future? What artists do you think are overrated?

I would like to collaborate with Little Brother and anyone from the Justus League pretty much. Median ahem. I think artists like Lil Wayne and shit are overrated. They aren't saying anything that hasn't been said before, they just do it sounding even more ignorant.

What are your goals and aspirations outside of music?

Outside of music, I'd like to get into photography or something like that. I've always been a fan of photography and graphic design.

Which artist or group is currently getting rotation on your mp3 player?

A ton of artists, I have over 11k songs on the zune. Common, Black Star, Slum Village, Digable Planets, too many to list.

I'd like to shout out the Cosmic Souls Collective, Amor Jones, Indy Sparks, SLik d, BC for helping me come up with the idea behind More Than Music and smoking me out that one time (laughs) and everybody else making moves right now.